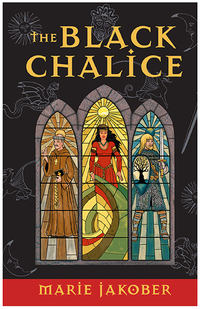 It's 1134. In a bleak monastery somewhere in Germany, Paul of Ardiun begins the chronicle he has been ordered by his religious superiors to write: the story of the knight Karelian Brandeis, for whom Paul once served as squire, who fell prey to the evil wiles of a seductive sorceress, thereby precipitating civil war and the downfall of a king.

But before Paul can set down more than a sentence or two of this cautionary tale, the sorceress herself magically appears to him. He is a liar, she tells him, and always has been. She lays a spell on him: from this moment, he will only be able to write the truth.

Now, against his will, an entirely different story begins to emerge.

Marie Jakober first gained international recognition at age 13 with the publication of her poem "The Fairy Queen". Since then she has written five books, including The Mind Gods, and Sandinista, which won the 1985 Georges Bugnet Award for Fiction. She is a graduate of Carleton University with distinction, and has toured, lectured, and served on numerous SF panels. She lives in Calgary, Canada.