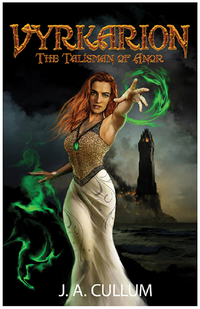 An opulent novel of racial and religious tensions, politics, deceit, passion and of course, magic!

In a world divided by nine races, humanity struggles to remain independent against the shape-shifter races who would enslave it.

In this third and final volume of the Karionin trilogy, the wizard Myrriden passes the living crystal Vyrkarion to a young noblewoman, Alanna Cairn, insisting she seek training from the cursed wizard Jerevan Rayne. Blinded by her opinion of Jerev an she foolishly refuses to pursue his help.

Aavik, the shape-shifting wizard-lord of the lizard folk, wants Vyrkarion for himself and finds opportunity in corruption.

Cursed by a god into madness, the king’s cousin, Rhys Cinnac, bearer of the living crystal Cyrkarion, heeds a prophecy “the king will die, a god-king taking his place, and a child will be saved” and believes he has been summoned to the throne.

Will the prophecy come true? Will the child be saved? Will Alanna Cairn see beyond Jerevan’s reputation in time to accept the training she needs to wield the intense power of the the living crystal?

Readers will discover the surprising answers in Vyrkarion: Talisman of Anor, the third and final volume of the Karionin trilogy.

About J. A. Cullum

As a child, J. A. Cullum could read and write by the age of four. Her major writing influences can be traced back to her father’s “stacks” — a collection of nearly two tons of science fiction and fantasy magazines — including works by Leigh Brackett, C. L. Moore and Poul Anderson.