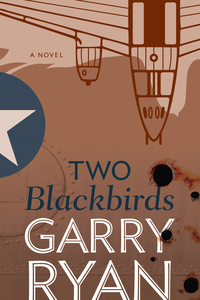 The fires of the Second World War are beginning to burn down, but legendary Canadian aviatrix Sharon Lacey is not out of danger just yet. Complications enter the young ace's life as deep-seated racial and class prejudice, potential fifth columnists and even her own killer code of honour threaten her hard-fought reputation, while a new and wonderful secret might also prove to be her undoing.

Meanwhile, across the Channel in Fortress Europe, new weapons have started rolling off Nazi production lines, and the characteristic buzz of the deadly V-1 flying bomb fills the air.

In the second act of his Calgary Herald-bestselling Blackbirds trilogy, Garry Ryan pits his intrepid heroine against an array of deadly new foes and challenges, proving that in war the enemy may wear the same uniform as your own.

Garry Ryan was born and raised in Calgary, Alberta. He received a B.Ed. and a diploma in Educational Psychology from the University of Calgary, and taught English and creative writing to junior high and high school students until he retired in 2009. That same year, Ryan received the Calgary Freedom of Expression Award in recognition of his outstanding contributions to the local arts community.