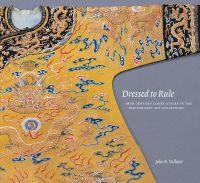 Art takes many forms. In this selection of Asian court attire, dating from the Qing dynasty (1644-1911), the phrase "you are what you wear" resonates. Vollmer journeys back to the thirteenth-century Chinese Empire, where ancestors of the ruling Manchu conquerors dressed fittingly. These exquisite costumes remind us that royalty once set fashion standards the way that celebrities do today, but that these garments also promoted distinct national and political messages that helped keep a ruling minority in power for nearly three centuries. Dressed to Rule is a guide to the exhibit, of the same name, that appeared at the University of Alberta in 2007.

John E. Vollmer is an internationally recognized curator and scholar in the fields of Asian art, textiles, costumes, decorative arts, and design. He is author of 30 museum exhibition catalogues and many academic and popular books and articles.