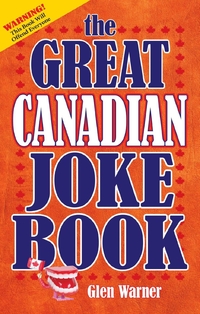 The world will end at midnight tonight -- 12:30 in Newfoundland. From poking fun at our regional differences and our cultural mosaic to joking wryly about our political culture, Canadians have a special brand of humour: * Q: How are Canadian politicians like diapers? A: They should be changed often, and for the same reason. * Q: How many Canadians does it take to change a light bulb? A: None. Canadians don't change light bulbs. We accept them the way they are. * Q: What do you call a Canadian who becomes world-famous as an actor, a scientist, a musician or an athlete? A: An American. * WARNING: Some of these jokes are sick, and a few are just plain offensive. But all of them are wildly funny and well worth retelling!

Born and raised in the “doomed and dysfunctional” city of Toronto, Glen Warner finally gave in to a career as a writer after several failed attempts seeking fame and fortune in the business world. Since then, he has contributed to such publications as The Globe and Mail, Maclean’s, Saturday Night, The Toronto Star, Toronto Life and Financial Post magazine. He was also awarded a Canada Council Grant for Excellence in Travel Writing. Glen believes much of life in this country is absurd and funny as hell if you can step back and observe it from a safe distance. His wife believes they should probably get an unlisted telephone number.