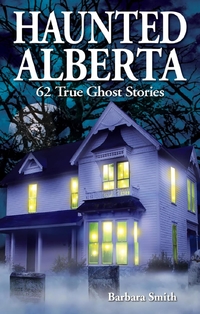 Barbara Smith is back with an all-new collection of spine-tingling tales in Haunted Alberta. Ghosts, spirits, specters, poltergeists, doppelgangers, phantoms, paranormal entities -- call them what you will, this province is full of them: * Two children in Edmonton have a ghostly companion named Tracy * One ghost haunts two houses in a quiet neighbourhood in Medicine Hat * A descendent of Mother Barnes, the famous 19th-century psychic, is attuned to an otherworldly guest in his Calgary home * Newspapers reported on a family in Daysland being terrorized by a poltergeist until the whole story was suddenly and mysteriously dropped * A young woman's tragic, untimely death could not prevent her from keeping watch over her little sister * A friendly ghost named Rex never checked out of the Auditorium Hotel in Nanton * Historical tours of the Atlas Coal Mine in the Drumheller Valley often include a ghost or several * Spirits at the Yates Theatre in Lethbridge put on ghostly performances after hours for some of the employees * A spectral woman haunts the Dunvegan Bridge, oblivious to the fact that she died long ago * And more.

Barbara Smith has always been a collector of folklore and in recent years has successfully combined it with her other passion, writing. She is the author of 19 ghost stories books to date, many of them bestsellers. A charismatic public speaker, Barbara is a frequent guest on radio and television. The Toronto-born author has lived for many years in Edmonton, where she received her B.A. English from the University of Alberta. She has taught creative writing courses at the university and college level. Born and raised in Toronto, Ontario, Barbara and her husband Bob currently live in Sydney, BC.