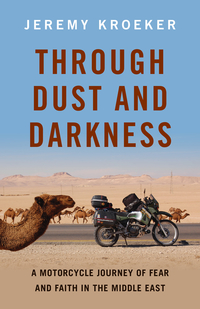 Jeremy Kroeker is a Mennonite with a motorcycle. He doesn’t have a funny beard and he’s never even driven a buggy, but his family hails from the same Mennonite community that Miriam Toews fictionalized in A Complicated Kindness. From childhood through college, Kroeker attended Christian schools where he learned to think critically back to predetermined conclusions.Years later, when his faith begins to unravel, Kroeker stops short of tossing it all aside, choosing instead to leave every unanswered question hanging there on the edge of his mind. He might have gotten away with it, too, except for a drunken resolution that forces the issue of God back into his life. In the fall of 2007, Kroeker decides to ride his motorcycle across Europe and into the theocratic nation of Iran... a nation ruled by God.In the end, Kroeker finds himself on a forbidden visit to the holiest Muslim shrine in all of Iran. Once inside, invisible hands reach into Kroeker’s chest and rip from his heart a sincere prayer, his first in many years. And God hears that prayer. For before Kroeker can escape Mashhad, God steals into his hotel room one night to threaten him with death. At least, that’s one way to look at it.

Throughout the narrative, Kroeker swings from dogmatic belief in God to overwhelming doubt before finally deciding that the key to approaching God is humility. He understands that uncertainty is not only an acceptable state of mind when considering the Divine, but it is necessary. He will always fear God. But who knows? Perhaps if he keeps riding, one of these days God will speak clearly. And that frightens him, too.

Jeremy Kroeker is a freelance writer, a speaker, mountaineer and the award-winning author of Motorcycle Therapy – A Canadian Adventure in Central America. With his motorcycle, he has travelled to over 30 countries while managing to do at least one outrageously stupid thing in every one. He has evaded police in Egypt, tasted teargas in Israel, scrambled through minefields in Bosnia and Lebanon and wrangled a venomous snake in Austria. One time he got a sliver in El Salvador. His writing has appeared in newspapers such as the Toronto Star, Winnipeg Free Press and Calgary Herald, and in U.S. magazines such as Alpinist, and Outrider Journal. He was born in Manitoba, grew up in Saskatchewan and currently lives in Canmore, Alberta.