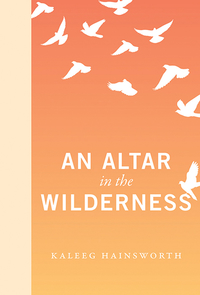 Father Kaleeg Hainsworth, an Eastern Orthodox priest with a lifetime of experience in the Canadian wilderness, grounds this manifesto in the literary, philosophical, mystical and historical teachings of the spiritual masters of both East and West, outlining the human experience of the sacred in nature.

The spiritual ecology described here is fully engaged with the wilderness beyond our backyards; it is an ecology which takes in nature as “red in tooth and claw” and offers a way forward in the face of accelerating climate change. This manifesto also challenges our modern self-conception as dominators or stewards of the natural world, claiming these roles emerged from western industrial history and are directly responsible for the environmental damage and alienation from nature we know today. The ecological scope of this book begins with a meditation on natural beauty as the divine that breathes through all aspects of life. We discover along the way that awe and mystery are so vital to the human experience of the natural world that without them we are doomed to treat nature as little more than a resource, a science or a playground for recreation alone. Instead, a new role emerges from these pages, one which accounts for the sacred in nature and places us in relationship to the world of which we are inextricably a part. This role is a priestly one, and Father Hainsworth outlines the significance and benefits of it in detail while also offering a vision of life in which a human being stands in the world of nature as at an altar built in the wilderness, a sacred offering in a holy place.

Father Kaleeg Hainsworth is an author, speaker, poet, naturalist, podcaster and Eastern Orthodox priest. He has been writing and speaking for more than twenty years on subjects as diverse as poetics, literature, Christian history, biblical exegesis, eastern spiritual traditions, family structure, addiction therapy and ecology. He holds an honours BA in literature from the University of British Columbia and a masters in divinity from St. Vladimir’s Theological Seminary in New York. He founded and served an Orthodox parish in Victoria, BC, for ten years, during which time he established a youth camp and an outreach centre for the poor as well as serving as a chaplain at the University of Victoria. As an avid and respected naturalist, backcountry enthusiast and ecological educator, Father Hainsworth has led numerous guided trips into the BC wilderness, where he taught spiritual ecology, survival and team building to youth and adults alike. He has three daughters, Ella, Heulwen, and Bridget. He lives in Vancouver, British Columbia.