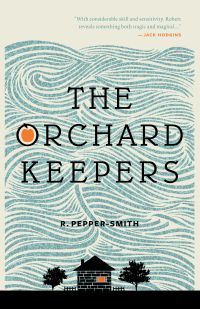 Robert Pepper-Smith’s trilogy of novels chronicling the lives of those with deep roots in the orchard lands of British Columbia comes full circle with this volume, collecting newly revised editions of The Wheel Keeper and House of Spells with Sanctuary.

The Wheel Keeper introduced readers to Michael Guzzo, raised in one of the many immigrant families who flocked to the vineyards and orchards of the Kootenays. When the government plans to flood his village for a hydroelectric project, young Michael seeks escape with his rebellious cousin Maren, who is experiencing her own story of displacement.

In House of Spells, Rose and Lacey are two teenagers from the region who share a vital connection to Michael. When Rose becomes pregnant, the wealthy Mr Giacomo offers to raise the child, but can this mysterious benefactor be trusted? Or is there something sinister going on behind the local entrepreneur’s offer?

Finally, in the never-before-published Sanctuary, the stories of Michael, Rose and Lacey merge after Lacey goes in search of Michael in Central America.

Robert Pepper-Smith was born in Revelstoke, BC. He currently lives on a farm in the Cinnabar valley with his wife Anna and teaches philosophy at Vancouver Island University. His childhood in Revelstoke and his experience as a volunteer paramedic with the NGO Alianza in Guatemala have inspired this work. The Wheel Keeper (2002) was his first full-length work of fiction. In September 2011, NeWest released Robert's second novella, House of Spells. The Orchard Keepers, a collection of these two books with a third, Sanctuary, which finishes the series, was released in Spring 2017.