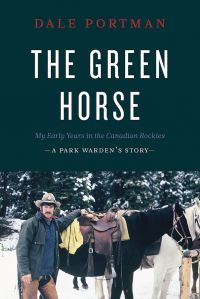 An inspiring, humorous and adventure-packed mountain memoir that takes the reader on a journey into western Canada’s backcountry parks during the raucous 1960s and 1970s.

Born in the west but raised initially in the east, Dale Portman was eight years old when his family headed back to the land of the Rockies. Growing up in Calgary, he was introduced to the Rocky Mountains at an early age and as a young man eventually found work in Banff National Park, where he spent most of his time in the saddle while working for outfitter Bert Mickle, based out of Skoki Lodge near Lake Louise. Jobs in the local tourist industry and at a couple of ski hills followed. Eventually Dale was drawn to the warden service, doing avalanche control and forecasting in Rogers Pass, with the backcountry of northern Jasper, Yoho National Park and Field, BC, eventually becoming the stage for many memorable, humorous, tragic and life-affirming moments.

The Green Horse takes the reader on a journey through a time when our mountain national parks were less touristy and more substantive. When there was space for everyone to enjoy without having to line up and there was a sense of freedom and adventure in the air.

Dale Portman spent nearly 30 years working for the warden service, often involved with backcountry travel, mountain rescue and avalanche control work in Jasper, Banff, Yoho, Glacier and Revelstoke national parks. He has written three books about his experiences working in the mountains of western Canada: Riding on the Wild Side: Tales of Adventure in the Canadian West (2004), Rescue Dogs: Crime and Rescue Canines in the Canadian Rockies (2009) and co-author of Guardians of the Peaks: Mountain Rescue in the Canadian Rockies and Columbia Mountains (RMB 2006). Besides experiencing other cultures in foreign lands, Dale’s greatest love is for extended trips to remote parts of the Canadian Rockies, whether on skis, on foot or on horseback leading a couple of pack horses. He and his wife, Kathy Calvert, live in Cochrane, Alberta.