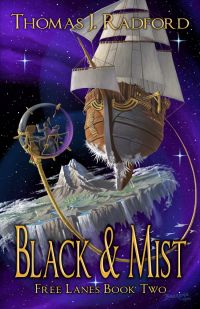 After a series of accidents, Nel is forced to wonder if she's harbouring a traitor onboard the Tantamount.

Thomas J. Radford is a New Zealand author who wrote his first novel when he should have been studying for an end of year school exam.
After that he acquired a few qualifications relating to History and Film.
Now he gets paid to watch Television but is banned from telling children this by their teachers and parents. Tantamount is his first novel.
He wants to know how the story ends as much as you do but lately the inmates seem to have taken over the asylum. And by inmates we mean characters and asylum we mean ship.