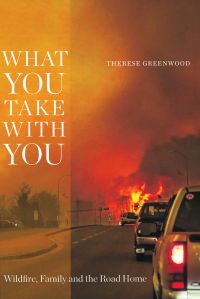 We stopped to watch the helicopters swoop down to fill the water baskets, like hummingbirds at a feeder. That was when we saw a new plume of smoke rising to the southwest.

Four years after Therese Greenwood and her husband moved to Fort McMurray, Alberta, their new community was devastated by one of the worst wildfires in Canadian history. As the flames approached, they had only minutes to pack, narrowly escaping a fire that would rage for weeks, burn more than 85,000 hectares and force 80,000 people to flee. This skilfully told first-person account is more than a disaster narrative: Greenwood’s experience and skill as a journalist and a mystery writer engages and maintains suspense. Her portrayal of how people behave in an emergency and how a community comes together is uplifting. Her stories of what she saved from the fire will resonate with anyone who has lived through a crisis, and help make sense of a life-changing event that garnered interest throughout the world.

Therese Greenwood has worked as a writer, reporter, editor, broadcaster, and communications executive. Her short fiction has appeared across North America. She lives in Fort McMurray, Alberta.